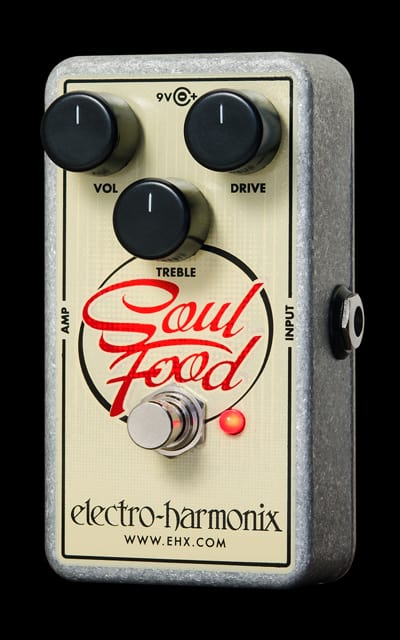 The Electro-Harmonix Soul Food is EHX’s entry into the world of Klon Centaur imitations (or “Klones”). If you’ve spent any amount of time on the guitar internet, you have doubtless heard of the Klon Centaur. Pedalmaker Bill Finnegan produced around 8000 units of this legendary overdrive pedal, and at time of writing they sell used for around $2500. That’s a staggering sum for a pedal, and so a number of pedal manufacturers, EHX included, have taken the opportunity to capture the Klon’s essence at a fraction of the cost.

The Soul Food and other “Klones” (such as the Wampler Tumnus, the J Rockett Archer, and the MXR Sugar Drive) can be described as “clean boost” or “transparent overdrive” pedals. They make your sound louder without distorting it, which produces some pleasant results in combination with a cranked amplifier.

I’ve never played (or even seen) a Klon, so for this review, I’ll assess the Soul Food on its own merits. I’ll let you know what I liked and disliked about the Soul Food so that you can make the right decision for your pedalboard.

The Electro-Harmonix Soul Food comes in a small, utilitarian enclosure, painted on the top. It takes a 9V battery or a standard 9V power supply (EHX includes one in the box). There’s a dip switch inside the enclosure that lets you switch between true and buffered bypass modes, and there are three knobs labeled “Volume”, “Treble”, and “Drive”. Volume controls the level of the boost, Treble adds or removes high frequencies depending on whether it’s right or left of noon, and Drive mixes distortion into the output.

How I use it

In my opinion, the magic lies with the Volume knob. By turning up the Volume knob, it will make your guitar’s signal much louder but it won’t distort. Suppose you have a tube amplifier on which you’ve cranked the gain almost to the point of distortion. When you turn on the Soul Food and play your guitar, the amplifier will distort with this louder signal, but not in a harsh way – rather, the sound is richer and fuller, but will still sound very “clean”.

I’m not convinced of the benefits of the Soul Food for playing with humbuckers, but with single coils it’s great. I would play my Stratocaster through the Soul Food into a Marshall DSL40C, with the Soul Food’s Drive knob set to 0 and the Treble slightly left of noon. With this combination, the single coils sounded much beefier and stronger. It made my “clean” sound much richer, and on the dirt channel, it helped me more easily hit a higher-gain sweet spot. I also tried the Soul Food with a 5W Bugera amp, whose tone I had previously found to be very thin, but the Soul Food filled out the sound and made it much more interesting.

You can directly set a distortion on the Soul Food itself with the “Drive” knob. In conjunction with a distorted tube amplifier, it’s a good way to add some grit, but I don’t think the sound stands on its own particularly well. I didn’t have great luck using the Soul Food with a solid state amplifier. I’m not alone – the conventional wisdom is that Klones sound best with tubes. Granted, I tried with my Micro Cube, which isn’t the most legit amp. Maybe you’d have better luck with a nicer solid state amp.

I am a big fan of the Electro-Harmonix Soul Food. If you love your clean sound and wish you could get a dirty sound just slightly hairier than your clean sound, then this is the perfect pedal for you. The Soul Food experience is very subjective and dependent on the rest of your rig, and there’s only so much value you can get from reading what I have to say about it – the only definitive answer is to buy one yourself!