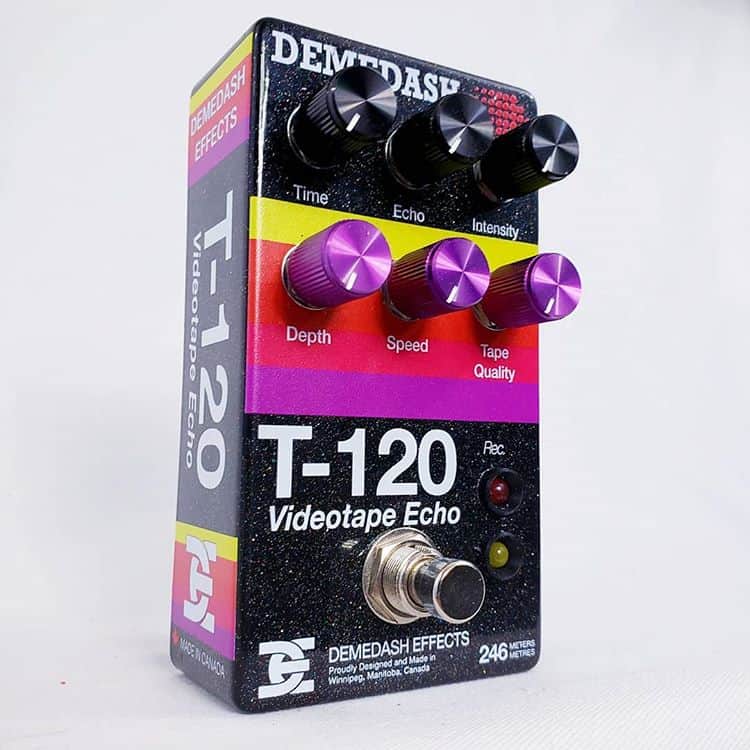 Steve Demedash, of Demedash Effects, is the man behind the T-120 Videotape Echo and the 112+ Drive Channel. Despite Steve’s recent entry to the pedal market, the VHS-inspired T-120 has exploded in popularity, with a waitlist over a year long. I reached out to Steve to learn about his background, the inspiration behind the T-120, and what the future has in store.

How did you get your start making gear?

When I was an electrical engineering undergrad student I was doing some home recording and wanted a bigger variety in sounds. Being tight on cash, I figured I could save some money and get some hands-on electronics experience by trying to learn to mod and build guitar pedals. I was terrible at it for a good long while, but, like anything, with enough experience, a minor level of competence started to emerge and I got less awful. And then pretty okay. Then passably good. And after a few years of doing it off and on as a hobby, I was pretty decent. So when I was able to competently build things using other people’s designs, it was like, well this isn’t that interesting anymore. I’ve built everything I have schematics for that I want. So I started tinkering with designs and making changes, using a bit of my book learning to help determine what certain types of circuit tweaking could accomplish.

I was buying and selling a lot of gear at this time and realized I could subsidize my gear habit a bit by building and selling a few of those modified circuits here and there. Whenever one sold, I’d make it again but with even more changes. I never really felt comfortable profiting off of the designs of others so the more something sold the more I changed it. That’s pretty much what happened with the T120. It was once a Keeley Mag Echo, but by unit 2 I had taken out a few things, added a completely new subcircuit and another knob. Unit 3 was even more different, and so on.

When I learned to lay out my own PCBs, I was free to make as many changes as I wanted, and it continued to change, updating the circuit as frequently as every 2 weeks sometimes. And even though I’ve settled on a core “sound” for it now, it still changes in minor ways now and then based on people’s feedback.

The T-120 has made a big splash in the pedal world. Tell me about the inspirations behind it, how you developed it, and the impact its success has had on you.

As I touched on above, it originated as a MagEcho. But really it could have been any delay. The PT2399 basis made sense for me, as it was already its own flavor of lofi, I just had to turn it into the kind of lofi I had in mind. I had made the graphic already, and just wanted to make a delay that sounded like the pedal looked. So I chose a starting point and adapted it from there to try to tune in that worn-out video sound.

As for impact, it let me quit my electrical/software engineering job so that was nice. Can’t beat working from home.

I’m curious about how the T-120 has been refined based on customer feedback. Can you share what some of those changes have been?

A few of the most prominent things I can think of off the top of my head that I did based on customer requests or feedback have been increasing the Delay time, making the LFO more powerful so that modulation is still very present at the lowest of delay times, making the Tape Quality knob have a much more pronounced effect, and most recently, changing the function of one of the knobs from varying just the effect level to mixing from fully wet to fully dry.

The T120 Deluxe began as a customer-requested mod as well, that I developed further later on into a fully distinct design.

Can you give some geeky details behind the T-120’s DSP?

No DSP, just a self-contained PT2399 digital echo chip that gets controlled and modulated by analog voltages, and then the output gets passed through some analog filters that really help shape that retro sound.

Who are the artists you’ve been most excited to see using the T-120?

There are too many, I’m afraid I’ll forget people! But making gear that’s been used by people like Justin Meldal Johnsen, Yvette Young (who has unit #420), Jenny Owen Youngs and Jared Scharff is pretty wild considering I didn’t set out with the intention or expectation of ever being a well-known builder, and yet, like a year and a half after I started putting my name on pedals, here we are.

Aside from your own pedals, what is your all-time favorite piece of guitar gear?

I dunno, I don’t think there’s one best. I made a guitar named Lucy (short for Lucifer) that I’m quite fond of. I love Chase Bliss stuff too. Not only does it sound great, but it’s all so damn over engineered. It’s hilarious to open those up, look inside and see what Joel has done. like, “wtf? 4 $20/piece delay lines, a $5 charge pump, 6 circuit boards with god knows how many layers each, and software that I, as a sometimes software engineer, can’t even mentally flowchart.” It’s always so over the top, I love it. Anyone who thinks those pedals are overpriced doesn’t know what they’re talking about. They’re appropriately priced, absurdly ambitious designs.

I’ve got a Dumble ODS clone that I built into a 1970s Peavey Amp chassis that sounds quite nice too, but it is too loud. I don’t think I’ve ever turned the master up past 2.

What can we expect from Demedash Effects in 2020?

There are 2 or 3 new circuits I’ve been working on right now that I think I would be excited enough about to release as Demedash Effects pedals and may see the light of day this year.

I need to be very excited about a design before I’m willing to go through the parade of self-promotion that comes with introducing a new product as a new name-brand, product-line unit. So I have an embarrassing number of original designs that, while really cool, just miss the mark a little for what I want to go through that hassle for and sort of end up on a shelf in my shop. It works out though because I’ll be talking to some other builder later and they’ll bring up an idea for a pedal they want to make and I’ll say “oh I’ve got a design for that” and end up selling them one of my circuit designs.

Put together a few of these super breadboards for myself last week so that I could prototype, validate and improve on a couple of rather complex ideas I have. This one is going quite well. I think it may even see the light of day as a full release if it keeps going on that way. #breadboard #guitarpedals #guitar #guitarist #guitarfx #fxpedals #effectspedals #guitareffects #prototype #prototyping #electronics #electricalengineering #maker #audioelectronics #analog

I sometimes get WTF reactions from other builders when they find out how much in-depth prototyping and design I do just for the hell of it.

I’ve been doing a lot of for-hire work as well for others, both design and layout. So there will certainly be a number of pedals coming out that I have helped with, in some small or large part.

Using microcontrollers in analog pedal designs has been something I’ve been doing more and more as well, which opens up a lot of really cool doors.

Do you have any advice for aspiring gearmakers?

Thanks to Steve for agreeing to this interview. You can find him online on Instagram or his website.